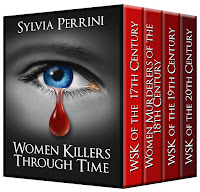 Our society can barely account for evil in males, let alone imagine it in females. The female nests, creates, and nurtures doesn't she or is it that we just want to believe in the intrinsic non-threatening nature of women?

Violence is generally considered the territory of the male. People believe that violence is a masculine trait caused by the hormone testosterone. Men are seen as the cause of violence, and women and children the ones who suffer. Literature through the centuries abounds with the submissiveness of female flesh, its compliant form, its penetrability. The female body gives life itself. Women do not physically dominate, thrust, and swagger. Women create while men destroy.

A grave misconception is that female serial killers are rare creatures, that they are not very common, a myth perpetuated by both the press and popular media.

Serial killers are not a phenomenon unique to the late twentieth century, nor are they exclusive to America. The case histories of the killers mentioned in these books clearly demonstrate that women serial killers have been active in many countries and for many centuries.

Welcome to the world of the woman serial killer.


Totally enjoyed this one and completely gobsmacked to find out how many cases there are of women killing husbands, children and loved ones over the centuries for so many reasons. A nice touch on some of the cases included the women's final words before execution, and just like the psychopathic and sociopathic serial killers of today, they weren't sorry for their dastardly deeds. Not even a little bit.

I had never even heard the term 'misandry' before (hatred of men). So that was new and exciting for me to learn. I was even more thrilled to discover a very cool blog dedicated to maintaining an index of female serial killers called Unknown Misandry. Most impressive and informative. Check it out when you have a chance.

After reading this collection in its entirety, it's obvious Perrini's strength lies in writing longer, more in-depth cases. In those ones, her writing shines. The way she recounts the cases is most compelling. The shorter cases, however, weren't as shiny. Perhaps it was a lack of available information. I'm not sure.  But there were a few cases that made me wonder why they were even included they were so brief. There were also a lot of typos in this edition. That's not usually a problem for me since I beta read for a few authors. I usually don't mention typos in reviews if there's only a scattered few, but in this case, I figured I'd give fair warning in case you are the type of reader that gets really distracted by them.

Overall, it was a good read. Many surprises and most informative. And like I said, the longer accounts are remarkable and fascinating. I would recommend it to true crime fans with that one disclaimer about typos.

By purchasing your books and preorders through this portal, you'd be helping us out. We get a small percentage of all sales at no additional cost to you. All proceeds go towards giveaways we host here on the blog. Thanks so much!!